Hop of the Week: Santiam

"Hopping" back on the bandwagon with another HOTW submission. This week I am going to be taking a look at the santiam hop. This is a relatively new hop variety that commercial breweries have not really tapped into yet. Most of the information available is offered by homebrewers who have experimented with this variety. Unfortunately there really isn't much in the way of available commercial beers that I can offer as a drinkable resource. It seems if you would want to find a beer brewed you would have to find a hop festival or special event at a pub. 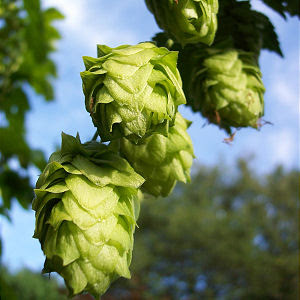 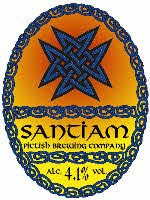 Santiam hops are naturally seedless; the worlds first variety to be this way. The benefit of a seedless hop is that seeds can add undesirable oils to a beer, which can lead to off flavors. Seeds may also cause a problem when breweries negotiate prices with their hop supplier, since they add unwanted weight to a bulk order.

Typical use: Although listed as an aroma hop I would place this is the dual use category. Dual use as in flavor and aroma, it can also be used as a bittering hop but much like cascade it is lower in alpha acids so you would need to adjust accordingly and would be using a little more of your stock.

Style use: It is said that this hop is closest to German Tettnanger and German Spalt. In this case it would be best used for German and Belgian style ales and lagers. In my experience though it seems to be a bit more American than these noble varieties which make it perfect for a pale ale.
Flavor/aroma: Somewhat noble, I also get fruity and floral aromas. In the flavor department what I have picked up most from these hops is a berry component. There is also a citrus and peachy aspect to them. When these are used as a standalone hop it gives a pale ale a fruitiness I have not seen when using other hop varieties. Others have said that they bring a small bit of a melon component. They are rather smooth and combine with a caramel aspect very nicely in a beer. All in all they add a fruity flavor which is probably affected most by the grain bill of the beer that you are brewing.
Substitutions: According mostly to the hop variety data above the best substitutions would be German tettnanger and German spalt. I tend to agree when using small amounts of this hop, however if using for a pale ale or an IPA a mix of summit and amarillo would probably do nicely. Using that substitution it will definitely come out more citrusy but the summit hops would add a nice fruitiness as well as the tangerine I get from amarillo hops. I have yet to come across another hop that has a berry like component as santiams do.

Since I have some Wyeast 1007 German Ale yeast ready to be used I think my next brew is going to be a German Alt bier or a Kolsch. I am pretty sure I have a few ounces of santiams in the freezer so I will probably use them as a stand alone hop in this beer. I will try to remember to post the results a few months down the road when it is finished.
Posted by Grant at 11:01 AM